The Common Degu or Degu Octodon 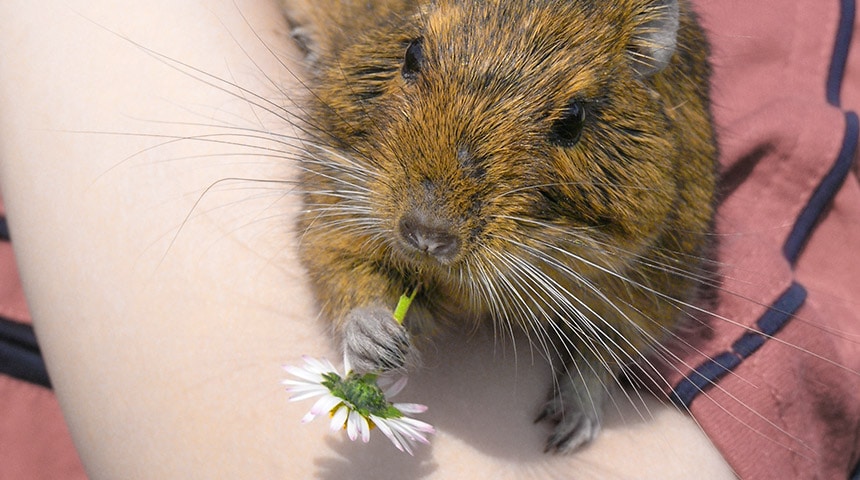 The common degu, or degu octodon, bears his name in connection with the shape of its molars and premolars in the shape of 8 (octo in Latin).

The degu belongs to the order of rodents and the suborder of hystricomorphs, which explains why it is herbivorous and not omnivorous like rats, mice, hamsters and gerbils, which belong to the suborder of myomorphs. It is a very docile small mammal with an average lifespan of up to 10 years. Degus are extremely sociable and it is advisable to have several at a time to avoid boredom. However, they are very destructive and continuous surveillance is required when they are free. The degu is mainly diurnal. It should never be grabbed by its tail, which has a defence mechanism called autotomy. When a predator grabs it by the tail, an enzyme is released and the animal then lets go of one piece of its tail.

The degu’s diet, similar to the chinchilla, consists mainly of grass hay (Timothy/meadow timothy), a few vegetables and a small amount of feed, no more than 2 tablespoons per day per degu. It is as fragile to changes in diet as our friends the rabbits and guinea pigs, so any new food should be introduced gradually. Apple tree branches can be used to wear out the teeth, which all grow continuously, similar to rabbits and guinea pigs. Their incisors have an orange colour due to the presence of iron. The degu naturally engages in coprophagy: it eats its own faeces and those of its cage mates in order to recover vitamins.

The chinchilla requires a lot of space, so a spacious cage with several decks is recommended. It is particularly destructive and can destroy a plastic cage bottom in as little as one evening, so a vivarium (glass aquarium with wire mesh cover to ensure good ventilation) is recommended. Several hiding places (cardboard box, PVC tube) can be provided, as well as an exercise wheel, preferably solid, to reduce the risk of leg injuries caused when fingers get caught between the bars of the wheel. Cedar and pine chip litter should be avoided, as these substrates are irritating to the skin and respiratory tract. Instead, we recommend litter made from aspen shavings or recycled paper. A sand bath should be offered to degus and chinchilla to maintain their fur, approximately once every 2 days, for 30 minutes. It is not advisable to leave the sand bath in the cage at all times, as the animal could mistake it for litter. It is also advisable to change the sand regularly to avoid the risk of infection. A comfortable room temperature for the common degu is between 10 and 22 degrees Celsius. At 27 degrees Celsius, it is susceptible to heat stroke.

Dental malocclusion is very common. It can be genetic or acquired. Normal teeth grow continuously - if they're not worn out properly, they form bumps or spikes that may injure the tongue or cheeks.

There are several causes: familial, traumatic, secondary to an infection, or inappropriate food.

Treatments are intended to trim the teeth to a normal angle and length. This trimming should be done routinely, ideally under anaesthesia (every month).

Several small rodent mammals, including the degu, have the ability to escape if they're caught by their tail. If you grab a degu by the tail, its skin will remain in your hands to allow it to flee.

In this situation, amputating the tail is the only option.

If your degu requires medical care that cannot be performed in your hospital, we will transfer its file to our specialized team working the Centre Vétérinaire Laval.