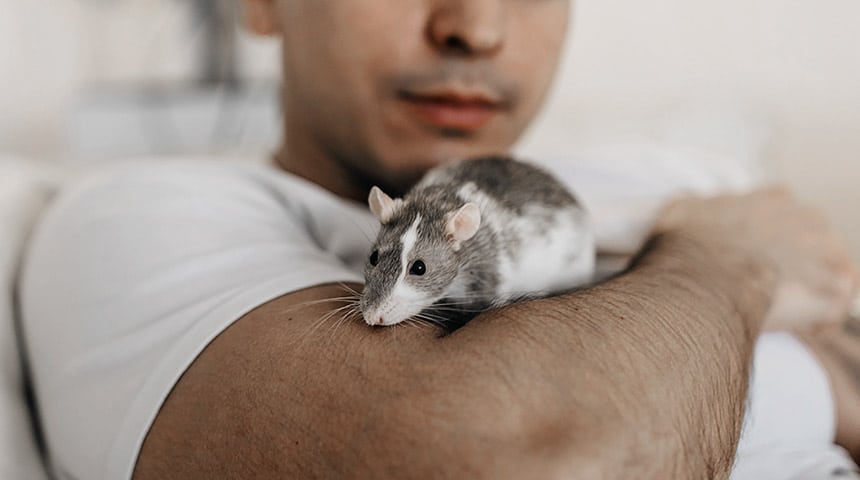 The rat is a small, little-known pet mammal. It is a very affectionate and sociable animal who's mainly active at night. Its life expectancy is about 2 years. The rat belongs to the order of rodents. Although the chinchilla and the degu belong to the same order, their dentition differs from that of rats. In the latter, only the incisors grow continuously, generating more problems than the back teeth.

It is an omnivorous animal, so its diet is very diversified: it can eat cereal, fruit, vegetables and dairy products, all in small quantities. Kibble must make up about 80% of the rat's diet in order to maintain an adequate nutritional balance. Fresh water must always be available. Apple tree branches can be provided to enrich its environment and allow it to wear out its incisors. Timothy's hay can also be donated, suspended in stands sold for this purpose; it will add a bit of a challenge to its diet!

The rat can be safely kept in a cage of the largest possible size to give it a chance to entertain itself easily. Several accessories or games can be provided: clean and empty cardboard box, PVC pipes, exercise wheel, empty paper towel roll, etc. The bottom of the cage should not be screened to prevent the animal from injuring its legs. Rats are very sociable animals and it can be worthwhile to own more than one. However, it is advisable to avoid the cohabitation of rats of the opposite sex if they are not spayed or neutered to prevent the multiplication of companions! The recommended litter is compacted recycled paper as it produces less dust, since rats are a little more fragile at the respiratory level. Pine or cedar litter should be avoided as it promotes skin and respiratory irritation.

This is a secretion of red coloured tears that can be observed in the eyes or at the tip of the nose (the nasolacrimal duct communicates between the eyes and the nose). The red pigment, called porphyrin, is produced by the Harder's gland which is located just behind the rat's eye. It can be mistaken for blood, which can nevertheless be present during trauma or abscesses of the tooth roots. However, overproduction of porphyrins should always be considered abnormal, either secondary to stress or disease. It is therefore advisable to consult your veterinarian if your rat displays such a discharge in order to detect the underlying disease early and/or to reassess the rat's environment in order to identify the stressor and eliminate it as much as possible

The rat's incisors grow continuously. Thus, after a trauma or a congenital anomaly of the dental root, incisors that become too short or deviated present a risk of malocclusion. This is because the upper and lower incisors constantly rub against each other when the rat eats: if one of them no longer comes into contact with the other, no obstacle prevents it from pushing too hard, so that it reaches the opposite part of the animal's mouth and pierces the skin. This causes a lot of pain to the animal, leading to a loss of appetite that can cause digestive upset, and weight loss that can quickly become fatal in our small pets. In addition, an infection can develop, causing even more damage. Any rodent that stops eating must absolutely be examined by a veterinarian in order to quickly identify the problem and avoid complications that could lead to the death of the animal. Teeth of abnormal size or orientation can be corrected by the size of the teeth. It must be done by a veterinarian to ensure that it is well adapted to the animal's normal anatomy, that it does not interfere with a good ability to grip and chew food and to avoid that it generates bleeding or pain causing anorexia again. In some individuals, the teeth will need to be cut monthly over a period ranging from a few months to a few years, depending on the recovery of the normal orientation of the damaged tooth.

Mammary tumours are common in rats, but are mostly benign (fibroadenoma), unlike mice in which mammary tumours are rare but often malignant. In about 10% of cases, it is a malignant tumour -this is then called adenocarcinoma. These tumours are influenced by hormonal stimulation, so early sterilization (less than a year and preferably even less than 3 months) considerably reduces the risk of developing breast mass (49% if intact versus 4% if sterilized).

The mammary tissue in rats extends from the belly to the back, so it is not uncommon for a mammary tumour to develop on a rat's flank or back. In this case, it is first recommended to analyze the mass through cytology to distinguish between malignant (metastasized) and benign tumours. If it is a benign tumour, it is recommended that the mass be surgically removed as soon as possible, as they tend to grow very quickly. The smaller the mass, the more it is possible to remove all the cancer cells around the mass and the lower the chances of recurrence. However, it is important to consider the risks of new masses reappearing as sexual stimulation is always present without sterilization. When the tumour is malignant, the prognosis is much worse and euthanasia should be considered. Chest X-rays can detect the presence of metastases, but often the animal develops breathing difficulty quickly when these settle.

The haematophagous (bloodsucking) flea is by far the most common parasite found in rats. The animal scratches a lot during infestation and can lead to a skin infection secondary to excessive scratching lesions. Heavily infected rats will also show signs of despondency due to anaemia secondary to the loss of blood ingested by too many lice. Diagnosis is made by visualization of the lice in the coat and microscopic observation. The treatment is carried out using 2 to 3 injections of ivermectin administered 7-10 days apart. The environment should be disinfected with a product suitable for small mammals (less smelly and less harmful).

Respiratory syndrome is often a mixed infection (involving a bacterial and viral agent) of the respiratory system in rats. The Sendai virus is an important agent not to be underestimated as the animal cannot get rid of it completely. Thus, when a stressful event occurs, the rat is prone to show the following clinical signs: sneezing, rubbing of the nose and eyes with its paws, secretion of porphyrins, wheezing, despondency, loss of appetite. Bacteria will often take advantage of the weakened immune system to settle in the sick rat. Purulent secretions and breathing difficulties then appear. The rat can also show a movement in the belly that follows the thread of respiration and is called abdominal thrust. The bacteria most often involved are Streptococcus, Corynebacterium and Mycoplasma. Antibiotic treatment is then necessary, as the duration and effectiveness of the treatment vary greatly from one individual to another. It is crucial to provide a slightly warmer than normal environment to support the symptomatic animal (24-25 °C), provide an environment with good ventilation (avoid aquariums or lids without screens), change bedding frequently to limit exposure to ammonia and limit stress as much as possible. The affected rat should be quarantined in a separate cage from other rats in a different room and hands should be washed after each handling to avoid contamination. Follow-up with your veterinarian is essential in order to treat any recurrence of the respiratory syndrome quickly and thus increase the chances of recovery.

If your rat requires medical care that cannot be performed in your hospital, we will transfer its file to our specialized team working the Centre Vétérinaire Laval.