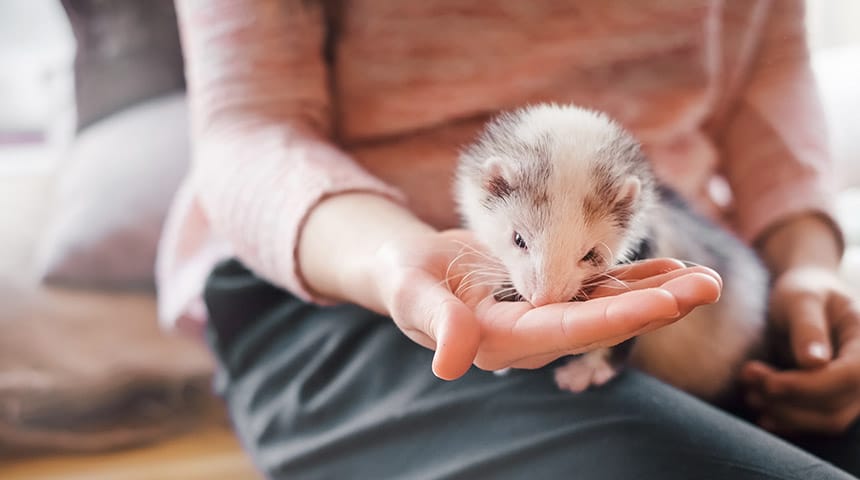 The ferret is an adorable little critter, and makes an excellent pet. A ferret can live up to 10-12 years, but the chances of developing tumour problems are very high and the most ferrets will die between 5 and 7 years of age. However, because they are curious and so adorable when they sleep, we can fall in love with them. You should know, however, that it is not recommended to leave a child under 6 unattended with a ferret, especially at night: they have persistent predatory instincts that have led to several cases of unprovoked attacks being reported in young children around the world.

Although he sleeps a minimum of 12 hours a day, he is very active during his waking periods. It's a very intelligent animal that can learn a few tricks (turning, standing, etc.), but its poor ability to hold still for more than a minute makes learning a little more challenging. It takes particular pleasure in stealing your objects to hide them in a hiding place, either the underside of your bed or behind a piece of furniture - so be careful when you let it roam free! Moreover, ferrets tend to chew or even swallow anything they find, no matter if it's edible or not. Unfortunately, many of these swallowed findings will damage your pet's digestive system along the way. They can also get stuck and cause digestive obstruction. It is therefore important to keep a close eye on your ferret when it is roaming free. Ferrets are carnivorous animals with several glands that give off a strong, characteristic odour. It is important to be aware of this, as this odour can be unbearable for some people. Bathing not only fails to eliminate the smell, but if given more than once a month, it can actually increase it, as it causes repeated irritation of the glands, which will then produce more secretions.

Digestive transit is particularly fast in ferrets, 4 hours on average. Therefore, it is important to give your ferret access to food at all times in order to reduce the risk of hypoglycemia (low blood sugar). Ferrets need a high protein, low-fibre diet. Ferret food is ideal, but cat food can also meet its needs, as long as it is kitten food. A bottle of water is preferable to a bowl, as ferrets have a tendency to spill it and this promotes skin infections.

Nail trimming is recommended every two weeks and can be done with a cat nail clipper. Ear cleaning is also recommended every 2 weeks and should be done with a ferret, cat or dog ear cleaner. Be aware that the ferret normally produces a lot of brownish secretions in its ears without necessarily being associated with an ear canal infection or parasite infestation. However, if your ferret scratches its ears often, an exam is recommended to check if a pathology is responsible.

The ferret is particularly sensitive to Distemper, an incurable virus that can also affect dogs. It is therefore advisable to vaccinate him at 8, 11 and 14 weeks of age. Booster shots are essential as they extend the protection developed with the first dose. Most ferrets sold in pet stores will have received their first vaccine only, which is why it's a good idea to consult your veterinarian for a purchasing examination, not to mention the importance of a general examination to ensure that your new companion is in good health. The vaccine must be repeated annually to ensure continued protection. Ferrets are also at risk of contracting the rabies virus, which is why the rabies vaccine is also recommended. It is given as early as 3 months of age, and then annually. If your ferret has access to the outdoors in the summer, it is recommended that you give it a monthly treatment to prevent intestinal and external parasites using the Revolution product.

A cage with several landings is ideal for the ferret. Ferrets love to sleep in a hammock, so you can buy one in store or make one with towels or small fleece blankets. Avoid screened cage bottoms, as they can lead to paw injuries. Ferrets don't have many sweat glands, so they can't lower their body temperature as effectively as dogs and cats. For this reason, high temperatures should be avoided in order to prevent heat stroke. Ferrets can be trained to defecate in a litter, with some effort and perseverance in some cases. Tip: place the food and water bottle in one of the four corners of the cage: the ferret will not defecate near its food. Block the other corner with a toy and place the litter in the last available corner.

This is another very common tumour in ageing ferrets. The tumour located on the adrenal gland causes an increase in the level of sex hormones produced, causing several signs such as hair loss (usually located at the base of the tail and moving up the back), constant and excessive scratching all over the body, swelling of the vulva in females or difficulty urinating in males due to the increase in prostate size. In more advanced cases, there may be depression and loss of appetite due to damage to the bone marrow (the centre of red blood cell production). The lack of red blood cells will in turn lead to weakness. The diagnosis is suspected via the classic clinical signs and examination, but is made conclusively via the detection of the mass on ultrasound or the determination of the sex hormones circulating in the blood. The advantage of ultrasound is that it is possible to determine which of the adrenal glands is affected, with the left adrenal gland being most often affected (in 80% of cases).

In ferrets under 5 years of age, surgery can be reasonably possible if the left gland is affected. However, the right one is intimately linked to the caudal vena cava, a major blood vessel that may be damaged during surgery, which dramatically increases the risk of mortality associated with removal of the right adrenal gland. In addition, it is important to consider the risk of recurrence, i.e., the tumour returning to the other adrenal gland, occurring in no less than 33% of cases. If the animal is older than 5 years or if the right adrenal gland is affected, medical treatment is recommended instead. This involves injections of leuprolide acetate, first on a monthly basis and then at increasingly longer intervals. It is also possible to place a Desloreline implant. The advantage of this implant is that it constantly releases the molecule in almost equal quantities over a sustained period of time. This treatment will not cause the tumour to disappear, but will rather help to curb the effects associated with the overproduction of sex hormones, by reducing the initial global stimulation of the adrenal gland. Thus, on the one hand, the implant decreases the basal production of hormones, while, on the other hand, the tumour increases the abnormal production, creating a balance in the total level of hormones in the blood, thus making the clinical signs disappear. The ferret thus gains a variable number of additional years in comfort despite the presence of this tumour.

Epizootic catarrhal diarrhea, also known as “Green Slime Disease”, is a disease caused by the coronavirus. It is a condition frequently seen in adult ferrets recently exposed to a new ferret, especially a young one. The  and the virus can survive in the environment for about 6 months. The clinical signs are marked weakness, loss of appetite and greenish diarrhea with varying amounts of mucus. Vomiting may also be observed. Unfortunately, there is no treatment to act directly against the coronavirus involved, but the affected animals may benefit from supportive treatment, i.e., intravenous fluids and antibiotics to prevent bacteria from overgrowing and causing further damage to the digestive system. Medication that reduces acidity and digestive irritation can also improve the condition of the sick ferret. The newly recovered ferret should not be exposed to other ferrets for 6 months after infection to reduce the risk of contamination. N.B.: There are several causes of diarrhea in ferrets, including bacterial infection, digestive parasites, obstruction by a foreign body (an object that blocks the digestive system), etc. It is always advisable to consult your veterinarian if the ferret has diarrhea more than once or if its general condition is affected: if it sleeps constantly, if there is vomiting or a loss of appetite. Stool tests and X-rays can then be taken to determine the exact cause of the diarrhea and to decide on the appropriate treatment.

Unlike our other furry companions, ferrets are susceptible to catching the human flu. Indeed, it can be affected by the H1N8 type flu. The clinical signs are similar to those of humans: transparent nasal discharge (the presence of pus indicates the intervention of a bacterium that requires antibiotic treatment), sneezing, despondency, loss of appetite, and sometimes difficulty breathing. In the latter case, hospitalization with access to oxygen is necessary, as well as support with intravenous fluids to avoid dehydration. Similar to humans affected by the flu virus, there is no curative treatment and the animal should be supported during its symptomatic period with oxygen, good ventilation, heat, fluids and sometimes force-feeding. If you suffer from the flu, make sure you keep handling your ferret to a minimum and wash your hands as often as possible. The same applies if your ferret has flu-like symptoms: it could pass it on to you too!

This is a condition frequently encountered in ferrets over 5 years of age. It is a tumour affecting the pancreas, an organ involved in the secretion of insulin, which allows sugar from food to enter the cells. This tumour leads to an exaggerated production of insulin, which will therefore cause the sugar present in the blood to enter the cells too quickly and in too large a quantity, leading to hypoglycemia attacks. The classic signs are despondency, a ferret that is difficult to wake up, drooling profusely, dragging its hind legs as it moves (as if it were paralyzed) and ultimately, convulsions and coma. In case of an episode, apply honey or corn syrup immediately to the ferret's gums and offer him a meal afterwards. The diagnosis of insulinoma is made by examining the animal, taking a medical history with classic clinical signs and assessing blood sugar levels. For the blood sugar assessment, the animal must have had access to a meal within the last two hours in order not to skew the values downwards. Be aware that a human blood glucose meter cannot be used in animals, as the values obtained are either rising or falling in relation to the actual blood value of the animal. In case of any doubt, an insulin test can be carried out and the interpretation of the blood sugar level will allow a definitive diagnosis. Insulinoma is a tumour whose surgical removal is rarely sufficient, as it is difficult to remove it completely. Medical treatment consists of raising blood sugar levels by using drugs administered daily. A blood sugar assessment is then carried out once a week to adjust the dose in order to achieve an optimal blood sugar level.

If your furret requires medical care that cannot be performed in your hospital, we will transfer its file to our specialized team working the Centre Vétérinaire Laval.