Nutrition for Chinchillas and Degus 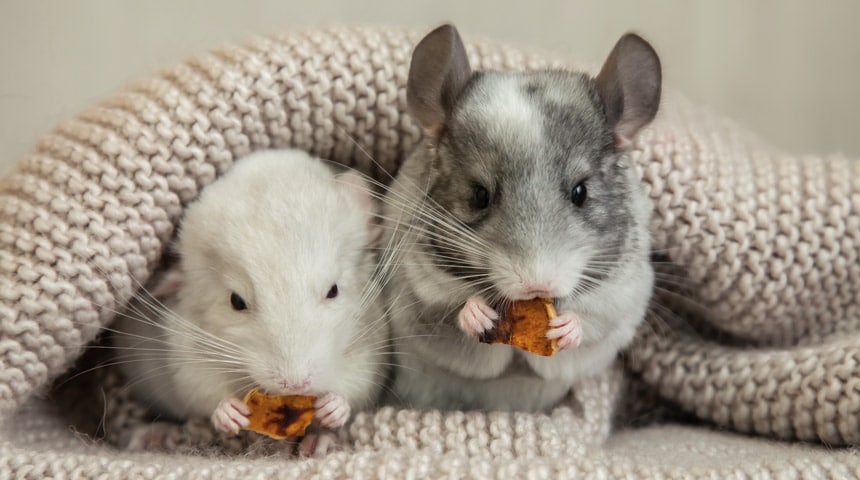 Most health problems encountered in chinchillas and degus occur as a result of an inappropriate diet. In fact, it is possible to prevent many chronic problems by following some basic ground rules on nutrition.

Chinchillas and degus need a high-fibre diet. Fibre is essential for maintaining a balanced bacterial flora in the gut and for stimulation of gastrointestinal motility. It is also crucial to the normal grinding motion needed to preserve the ideal length of teeth.

Hay should be the main source of fibre. It should be offered ad libitum and available at all times. Hay can come from many types of plants, which don’t all  offer the same nutritional value. Grass hay such as Timothy or Brome is ideal. Hay derived from legumes such as alfalfa is often sold in pet stores and is almost indistinguishable from grass hay. However, legume hay is higher in protein and calcium than grass hay, and although these nutrients are important for growing or lactating animals, they can be detrimental in adults in whom they can provoke weight gain and urinary problems.

Leafy green vegetables are another excellent source of fibre, and offer other nutrients not found in hay. They should be provided fresh daily, at about a cup per day. It is important to diversify the type of vegetables as they do not all carry the same nutrients, and some may even lead to imbalances if they are offered in large quantities (kale is high in calcium, for example). Lettuce, parsley, dill, cilantro, basil, mint, watercress, dandelion leaves, celery leaves, beet greens, chicory, escarole, rocket, kale, Brussels sprouts, collards and carrot greens are well appreciated by chinchillas and degus. High-sugar vegetables such as carrots or peppers, as well as fruits, are to be avoided. High-sugar foods in general, and particularly fruit, can destabilize the delicate balance of bacterial population in the gut; they should therefore only be offered occasionally as treats.

Several commercial chinchilla diets are available in pet stores, and these can safely be given to degus. Choose pellets that are plain and do not contain added grains or dried foods; chinchillas and degus tend to select these instead of pellets. Pellets are essentially made from hay, and, like plain hay, it is recommended to choose a pellet that is made from grass hay. Although pellets are composed of hay, it is finely chopped and so does not confer all the benefits of untreated hay. In fact, when pellets are offered freely, chinchillas and degus become more susceptible to weight gain, dental disease and digestive problems. Therefore, we recommend limiting your rodent's pellet consumption to 2 tablespoons per day.

Chinchillas and degus are very sensitive to diet changes and an abrupt diet change can result in serious health problems. All diet changes should be instituted gradually and under surveillance. Some animals may refuse to eat hay because of underlying health problems (hay can be difficult to chew for an animal with dental disease, for example). Consult your veterinarian to establish a diet plan that is adapted to your chinchilla or degu.